It was mid afternoon but there was no sign of sun anywhere. The sky was covered in clouds some grey, some pitch black and some white. The city was small with narrow roads, roads were chaotic but there was a beauty to the chaos. People were running in all directions, some with an umbrella, some on their cycles, some of them on their scooters cursing the traffic and a few privileged ones in autos and cars. Everyone knew that it would rain any moment. Disha was sitting near her window, observing the city. She had returned home after finishing her post graduation, a few months from now she will be leaving for her Doctorate. She had always been different, when everyone around her was going for engineering or MBBS or B.Com., She decided to study literature. While those who studied literature with her dreamt of writing a novel, she just wanted to appreciate the art. She had never had a boyfriend. Though she was very beautiful, there was an air of aloofness to her that strongly hinted of a unique kind of happiness. The guys who approached her, never stayed longer than a few months, for they could not decipher her. As for her She never found any guy interesting enough. Relationships never seemed important to her. That is until these vacations.

Since past few days she had been having dreams of a stranger, A tall man in a dark black overcoat, a grey muffler wrapped around his neck, eyes as deep and as still as a lake, Walking through the city roads on a dark moonless night. She saw his face and specially his eyes. When he turned back and looked at her. His face was nothing extraordinary but his eyes were. They were the eyes of man who could see through everything, who knew answers to all questions. She felt a strong pull, but before she could understand anything her eyes opened and the dream shattered. She had had this dream everyday since she had returned; today she had it for the 9th time. For the first time in her life she was in anxiety, it was a strange feeling for her. She wanted that guy, to meet him, to talk to him, to know him. She wanted him strongly, stronger than she had ever wanted anything. Today she would search for him at night. 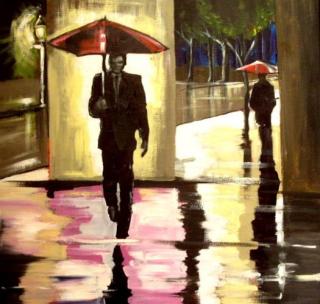 She left home an hour after sun had set, she had plans, or not having a plan was her plan. She was going to wander tonight, wander through the city, its narrow roads, covered alleys, bakery shops, primary schools, government hospital and what not. She would wander through the entire city, its every corner. It was a small city.
And so she started, for the first few hours until moon had properly come up, she walked through the main markets of the city, some of the broader roads. No she didn’t expect to find him yet, this was just a beginning. She knew she wouldn’t find him like this. One more hour passed some of the shop owners started shutting their shops down. Her anxiety was now increasing; she knew the moment was drawing closer. She had, by now, covered half of the city. It was a small city. Walking past the government school, then the bakery, she knew where she had to go but she was not prepared. Something was telling her that it was a bit early and the moment had not yet come. She kept on walking, covering what was left of the city. The night was falling, most of the shops were now closed and the city was covered in an eerie silence. She didn’t had a lot of time left, soon it will be too late for her to go back home.  Her anxiety was increasing.
The moment had come, she knew it. She started pacing toward her home. But that was not her destination, what she was going for was the street on the left of her home. That is where she saw him, in her dream. She was getting closer, she could see the tall four story building in front of her home.  Her breathing was getting stronger, less because of the walk more because of the anticipation. She could now see her home, her window, a small onewith wooden doors, on a yellow wall. There was streetlight in front of her window that  was struggling to light up. Soon she was on the crossroads. Now she knew why crossroads always intrigued her. They always lead one to their destiny. Her’s was towards left, The street where she saw him. She took left, the road was long and disappeared into a cloud of shops, homes, abandoned carts and darkness. He must be there, he should be, he had to be. But he was not. She walked a few steps looked farther, walked a few more steps looked even farther but still, he wasn’t there. She knew he would not come. It was just a dream. Her heart was not ready to believe, but reason took over. She walked back to her home, it was painful but in a strange way. It was so because for the first time she was feeling disappointed. She knocked on the door, gave an explanation to her mother and went upstairs into her room. She was feeling a strange emotion, something which was a mix of disappointment, realization, and some previously un-felt feelings. She looked out of her window, the city that looked like a painting in the afternoon, now looked abandoned and empty, devoid of any form of life, any form of art. Soon she fell asleep, her hands folded, her closed eyes looking out of the window.
A light struck her face, perhaps it was morning. She twitched her eyes and then slowly opened them. The light was unusually bright, somehow the neon light on street had finally managed to light up. It was still night, perhaps 4 AM. She looked out of the window, the road was long and disappeared into a cloud of shops, homes, abandoned carts and darkness. But somewhere before the road could disappear into darkness was a figure. It was tall, wearing black overcoat, a muffler wrapped around his neck. Her Heart started racing. Before she could say anything , call for him, run for him, He turned his head in her direction and looked at her. He had Deep blue eyes, He could see her, see through her, read her every thought, answer her every question. He knew her. More than she knew herself. She could not say anything, words would not come to her. He had her. She could not escape his gaze. She didn’t want to. Before she could understand anything, he turned back and disappeared into the darkness. It was the 10th day.

9 thoughts on “Dream By A Window”